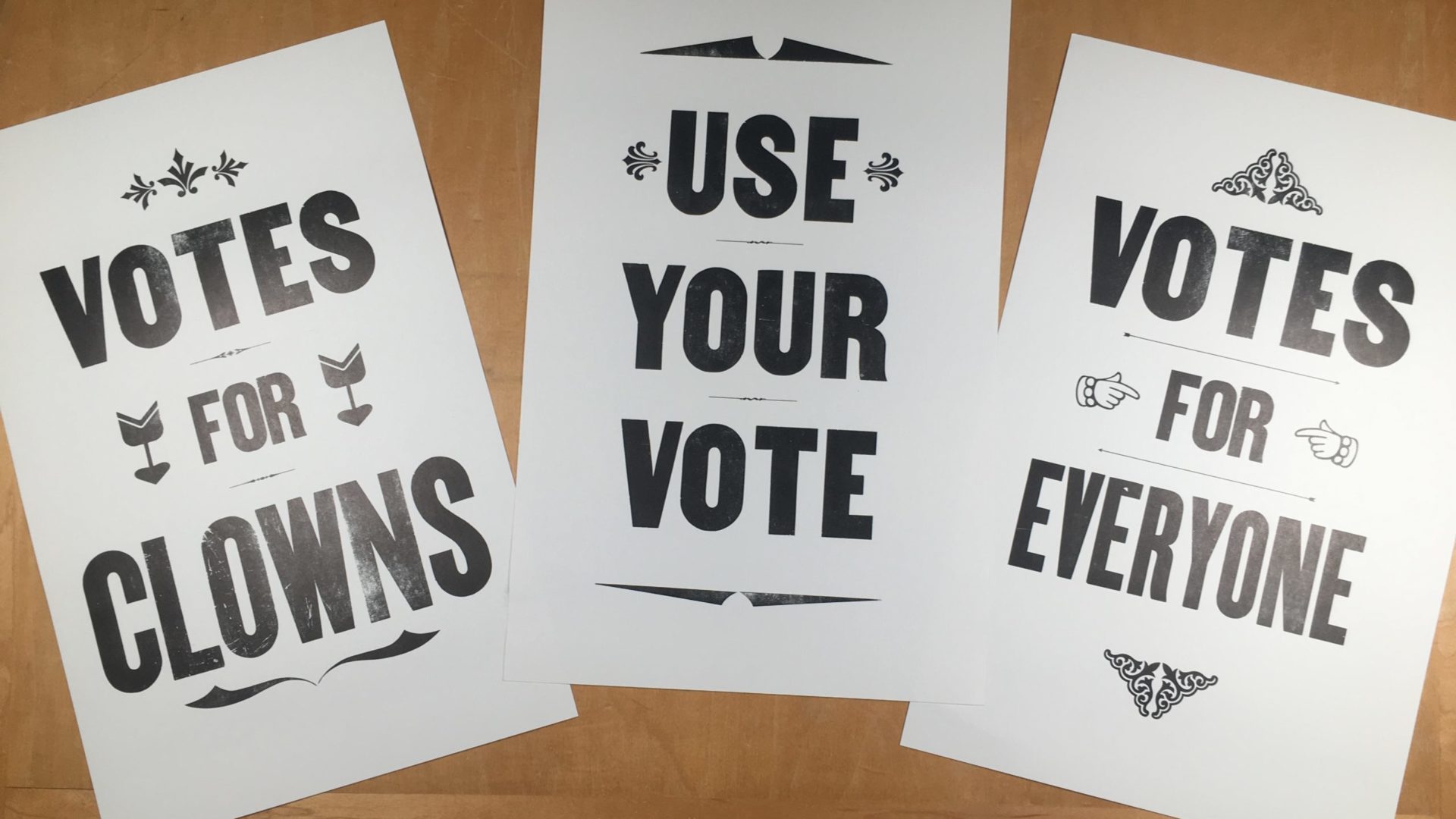 The Closing Act of this year’s Wild Rumpus Winter Circus show featured a shout out to the 19th Amendment giving women the right to vote, which was ratified in 1920 (and Wisconsin was one of the first states to ratify it!). As part of that act, the director wanted to have picket signs saying things like “VOTES FOR EVERYONE” in the style of Suffragette protest signs. We eventually settled on three designs—”USE YOUR VOTE,” “VOTES FOR EVERYONE” and “VOTES FOR CLOWNS” (hey, it’s the circus!). Although actual women’s suffrage protest signs were mainly plain black text on plain white paper, I added a few simple ornaments to these (again, it’s the circus!).

In addition to the plain ones for use as stage props, I printed a bunch on various color backgrounds using stock that I use to roll off excess ink at the end of a print run. This lets me use a lot less solvent to clean up my ink rollers, and gives me interestingly textured and colored backgrounds to use for prints like these (less waste, more variety!). I also added one more design to this run, “Keep Clowning Around”.

A lot of these were sold at the show, but there are still a few left in the shop.

Skip back to main navigation

At the end of October, I got an inquiry from the executive director for the Wisconsin Council of Churches, asking if I would be interested in taking on a commissioned piece on the theme “It is for these days we…
END_OF_DOCUMENT_TOKEN_TO_BE_REPLACED

As probably many people know, the art of letterpress has deep religious roots. Gutenberg is known not only for the invention of letterpress, but for his famous project, a Bible (less well known, he likely also printed indulgences as a…
END_OF_DOCUMENT_TOKEN_TO_BE_REPLACED

I started 2020 with a plan, and a list of local shows to apply to. I applied to a couple. I got in to a couple. I put together a booth. I did one show. I was preparing to do…
END_OF_DOCUMENT_TOKEN_TO_BE_REPLACED

Since lockdown started and schools closed in mid-March, I’ve printed regularly, but mainly my quarantine journal, along with a few small personal projects. But last week I finally found some time and inspiration and did an iterative design sprint inspired…
END_OF_DOCUMENT_TOKEN_TO_BE_REPLACED

Trying not to get too bogged down in everything, and keep the ink moving.
END_OF_DOCUMENT_TOKEN_TO_BE_REPLACED